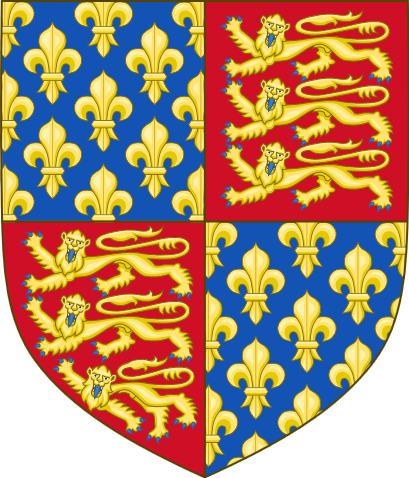 The zenith of medieval heraldry was in the 14th and 15th centuries. This coincided with several major changes in medieval society, such as the Hundred Years War between France and England, the Wars of the Roses in England, the papal schism of the Latin Church, and the Black Death.

These events introduced great movement of populations and between the classes, creating a desire to map one's heritage and anxiety to preserve what one already had. It also coincided with developments in military technology that required a system of quick and easy identification from a distance.

The wars affected heraldic symbology. King Edward III, whose claim to the throne of France through his mother sparked the Hundred Years War, took the French royal fleur de lis on his shield to show that claim. 9 It remained in the royal English arms until 1801. 10 The competing houses of York and Lancaster took, as their badges, white and red roses respectively. However, roses did not appear directly in the shields of their coats of arms. 11 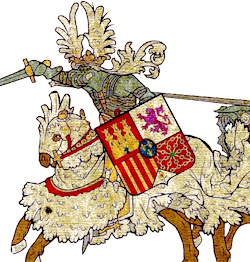 At the same time, this was the heyday of the tournament. Tournaments had a large influence on heraldic symbology because they had different requirements than combat.

In early days, the charges were highly symbolic and intended to communicate an important message across a distance (such as a battlefield) quickly. As tournaments and increasing numbers of people using heraldic arms became more elaborate, the portrayal of charges also became more realistic and, detailed and ornate. The emphasis was on beauty and pageantry, with the heralds being expected to recognize and interpret the arms. This allowed the arms to become far more complex. 12

By the mid-16th century, the golden age of heraldry had ended. The main reason for its demise was the same as for its origin. Evolution in military technology, such as the introduction of firearms, made the all-encompassing armor if the High Middle Ages obsolete. The rise of professional armies, in the wake of mercenaries like the condottieri in the 15th century, replaced the chaotic groups of individual knights with more disciplined troops who fought under one banner (the way the ancient Romans had).